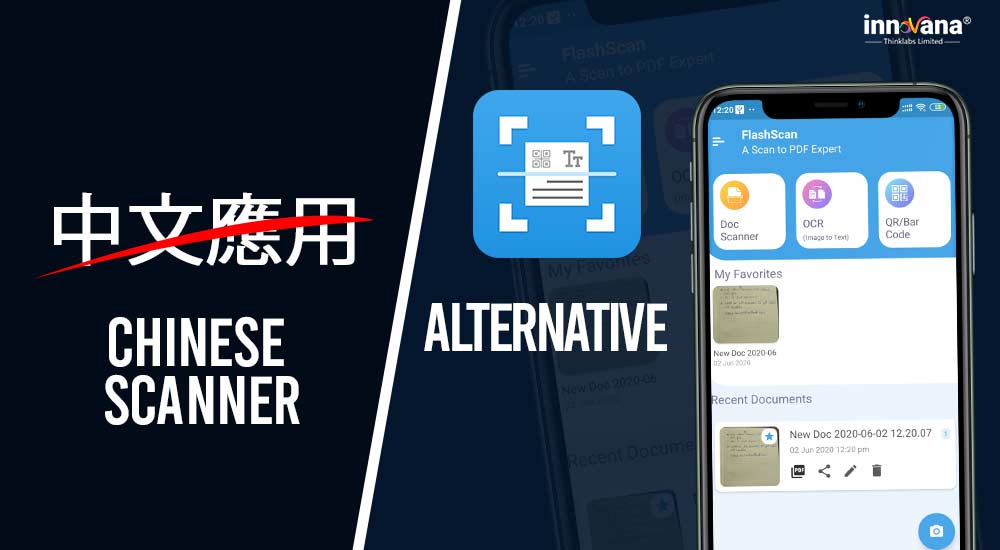 It’s not a secret anymore that Chinese apps hinder the privacy and security of their users’ devices and data. If you use Chinese apps, then your data is more prone to risk than the people who don’t use Chinese apps. From a web browser UC Browser to a document scanner app like CamScanner, global cybersecurity experts have convicted almost every Chinese app for some malicious activity with their user data. Currently, people across the globe are trying not to use any Chinese apps. People are looking for alternatives for apps such as Tik Tok, UC Browser, WeChat, etc.

But it seems that people are ignoring one of the most data-sensitive app and, i.e., document or we can say, PDF scanner apps. These apps can affect you the worst as they deal with your most private data. You use them to scan your important papers such as bank statements, driving licenses, certificates, etc. It can be a huge trouble for you if any of these documents get leaked or accessible by others. Hence, you have to be cautious about the scanner you are using. In this write-up, we are going to present you with one of the best PDF scanner app that can serve you as the best alternative to Chinese scanners. Before that, we are going to check some more reasons for avoiding Chinese apps.

Here we have mentioned the reason because of which you should avoid using Chinese Apps on your smartphones and other devices.

Security experts have regularly observed various serious security threats in multiple famous Chinese apps. Experts have denounced even some of the popular apps such as Tik Tok and UC Browser for user data theft and various other security claims. One such common and widely used Chinese document scanner app is CamScanner, which was alleged for having a Trojan Horse module. Hence, security is always a concern while using any Chinese app. And that’s the reason why most of the experts advise to avoid such apps.

Now, as we have discussed the reasons to avoid Chinese apps, let’s discuss one of the best document scanner app for Android. It is none other than FlashScan, a recently launched one of the best Chinese Scanners alternatives.

A few years ago, one of the most popular Chinese document scanning app CamScanner was exposed by the security experts for having a Trojan Horse malware in the app. Because of which the app also got removed from the play store. But after some time, the developers claimed that they have removed the malware from the program and relaunched the app on the Play Store. However, it is still risky to use CamScanner or any other document scanner app from Chinese software organizations. At the same time, there are n number of Chinese apps available on the Play Store. So, it gets more difficult to choose a safe scanning option for your Android device.

But don’t worry, we have brought a trustworthy solution to your problem. You can rely on FlashScan to scan your documents to PDF files. It offers everything you need in a scanner app without even compromising with the security and privacy norms.

FlashScan is the best alternative to Chinese Scanners. Here are some of the salient features of this document scanning app.

With FlashScan, you just need to click, scan, and save the document that you want to scan. Here is the link to get the application on your Android smartphone.

So, here we would like to end our write-up. Before that, we would like to conclude that you must avoid the Chinese apps as much as you can. We recommend you to avoid apps like CamScanner that comes with malware. Instead of that, you can use one of the best document scanner app, i.e., FlashScan, for all your document and barcode scanning requirements.

So, what’s your take on avoiding Chinese apps. Let us know.

Furthermore, if you want more updates about the latest Android apps, then subscribe to Innovana blogs.