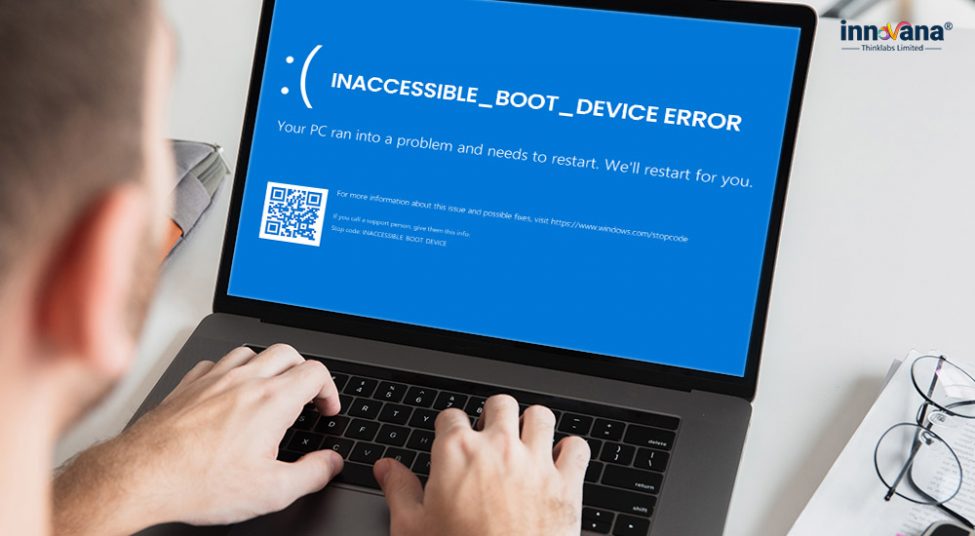 Continuing our series of posts relating to fixes for various Blue Screen of Death errors, in this write-up, we talk about Stop Code 0x0000007b, i.e.,  Inaccessible Boot Device Windows 10. It is yet another scary but easy to fix BSOD error. The quick fixes shared here are all that you need to resolve this issue in the twinkling of an eye.

But, to begin with, it is apt to discuss a bit about what caused this issue, i.e., its root causes. When you know the prime culprits behind a Blue Screen of Death error, fixing it becomes a duck soup. Thus, we enlist them below.

There can be multiple reasons for which you get the Stop Code Inaccessible Boot Device in Windows 10. Here are the most notorious ones out of them.

Now that you know what prompted Windows stop code Inaccessible Boot Device, fixing it will be much easier. Without wasting any more time, let’s move on to the fixes.

Here are the fixes that you need to resolve Inaccessible Boot Device Windows 10 error with minimum efforts and in the least possible time.

The in-built troubleshooting utility in Windows is capable of resolving almost all the Blue Screen errors such as Inaccessible Boot Device in Windows 10. Therefore, follow the below steps to run the troubleshooter.

Since corrupt system files are also one of the main reasons for Inaccessible Boot Device Windows 10 SSD error, you need to run the sfc/scannow command to detect and fix the issues. Here’s how to do it.

DISM is another built-in Windows tool to fix the issues such as Inaccessible Boot Device that occurs after the BIOS update. You can follow the below steps to run it.

The chkdsk command in Windows is for checking and fixing the hard drive issues which are a major reason for Inaccessible_Boot_Device error on Windows 10. Therefore, implement the below steps to run it.

Entering the Safe Mode is another way through which Inaccessible Boot Device in Windows 10 can be fixed. Thus, implement the below steps to use PC in Safe Mode.

Drivers often start acting up and cause various BSOD errors such as Inaccessible Boot Device Windows 10. You need to keep them updated at all times to drive away such annoying issues. The best way to update drivers is through ITL Driver Updater as this utility not only updates drivers automatically but also takes PC’s performance to higher levels. Therefore, follow the steps mentioned below to update drivers in a New York minute.

Through this write-up, we discussed the easiest fixes for Inaccessible Boot Device Windows 10. We hope that you found them helpful and the issue no longer troubles you. In case you need more assistance or have any suggestions, then we are all ears, do let us know via the comment box below. Also, it would be great if you share this article with your friends who are struggling to fix this irksome error and spread the tech knowledge that you have just acquired. We will be back soon with another tech fix and updates, till then stay tuned with us.