Recently, the Indian Government has banned 59 Chinese apps, including some big names such as Tik Tok, UC Browser, etc. The government has taken this action following the ongoing border tension between India and China. However, that’s not the only reason for the ban on these Chinese apps. Security experts have alleged most of the Chinese apps as a threat to the privacy of users for years.

Even though the government has banned major Chinese apps, there are still lots of such malicious apps available on the Play Store. It is quite hard to find the origin of the App. One have to do a detailed research for that. Hence, people are still using lots of malicious apps without knowing their history and country of origin. For example, Zoom, Turbo VPN, Tik Tok Lite, and many more shady apps are still available on the Play Store. And it is quite impossible to vanish all those apps suddenly from the web, which makes the problem much worse.

However, the solution to this problem lies within the ‘Vocal for Local’ campaign. The Indian Prime Minister, Mr. Narendra Modi has launched this campaign to support the local startups and business. Along with the actual motive of the campaign, it can also provide a solution to the current security issues with the app. Instead of using the malicious Chinese apps, it is better to use their Indian alternatives. But there is still a problem. As mentioned earlier as well, most of the people do not have much knowledge about the genesis of the applications they use.

After sincerely evaluating the above problem, Innovana Thinklabs has launched an app to educate its users about the Indian apps. The app is available on the Play Store with the Indian App Finder name. One can easily install it on his/her Android smartphone from here.

What is Indian App Finder

Indian App Finder is a recently launched Android app that enlightens its users about the Indian apps. It is a digital support from Innovana Thinklabs to the current ‘Vocal for Local’ movement. The app helps others made in India apps to grow by educating them to its users. If someone is looking for an Indian alternative to a malicious app, then Indian App Finder helps him/her to find that perfect option. If someone only wants to know about the available Indian apps in the market, then also they can use this application.

However, the developers have made it clear that this application is only for education purpose. It does not encourage someone to uninstall or install any particular app. Neither the Indian App Finder forces someone to choose some particular apps. The choice of using an application entirely depends upon the users. It only helps other ‘Made in India’ apps to gain recognition by making the people aware of them.

How to Use Indian App Finder

Users do not have to put much effort to use this handy application. All they have to do is to install the Indian App Finder app on their Android smartphone. After installing, it is suggested to have an active internet connection for better results.

Once the users open the app, it provides them with a list of app categories. So, one can click on any of the categories to know about the Indian applications available in that category. It educates the users about all kinds of Indian apps.

When the user selects a category, the app provides him/her with all the available Indian apps of that particular type. 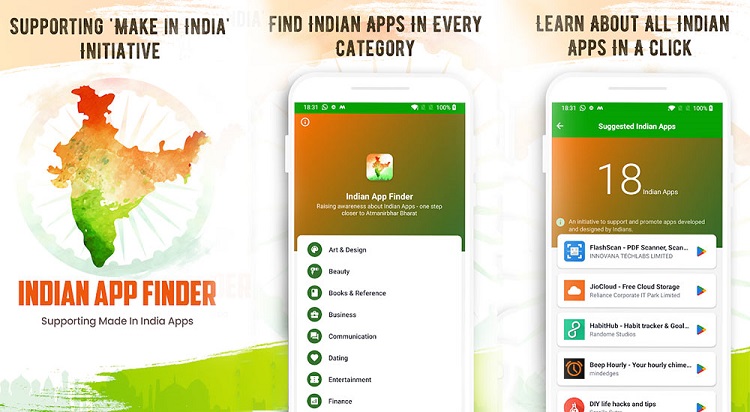 It also directs the users to the Play Store if they want to download any Indian app from any particular category.

So, that was all about the Indian App Finder. People who believe in the ‘Vocal for Local’ campaign and want to support the technology industry of India must have this app on their smartphone. By installing this single application, users can get aware of so many Indian smartphone utilities. This will ultimately help in the growth of the Indian economy as well as the software industry. Here is the installation link.

Keep yourself updated with the latest technology and trends with Innovana Thinklabs Limited.
Aman Jul 07, 2020 0 1.55K