Read this NVIDIA GeForce MX150 driver download & update guide to know how to get and install the latest driver for this powerful GPU on Windows.

NVIDIA is quite famous for developing some great GPUs for Windows PC. One of them is GeForce MX150. It can enhance the gaming capabilities and performance of your system pretty exceptionally. The GPU is also a prominent choice of video editors and other graphics experts. However, without an apt driver, you cannot make full use of this NVIDIA graphics hardware. But, not everyone knows how to get and install it successfully on Windows PC. Hence, here we have brought this easy NVIDIA GeForce MX150 driver download, update, and installation guide.

Any Windows 10, 8, or 7 users can use it to get the correct drivers for their NVIDIA MX150 GPU. So, without making more delay, let’s proceed with the guide and check out the ways to download and install the GeForce MX150 driver.

Here are the methods that you can use to manually download and install the latest driver for your NVIDIA GeForce MX150 GPU on Windows PC.

The most manual way of getting a driver for your NVIDIA GPU or any other hardware is to download it from the official NVIDIA website. However, the method is pretty techy and requires a lot of effort. But, some people like to download drivers this way only. Here is how you also can download the NVIDIA GeForce MX150 driver from the NVIDIA website and install it on your PC.

Another helpful manual ways of getting your hardware drivers updated is using the Windows default tools such as Device Manager and Windows Update for doing so.

Device Manager utility of your Windows PC can also get the latest driver updates for your hardware. It also allows you to install those updates. Here is how you can use this Windows default tool to get the latest NVIDIA GeForce MX150 driver and install it on your PC.

No matter whether your PC requires an OS update or a driver update, the Windows Update feature can help you in both cases. You can also use it to get the latest driver for your NVIDIA GeForce MX150 GPU. Here are all the steps to do so.

Also Read: How to Download NVIDIA Graphics Driver on Windows 10

After discussing the prominent manual methods of downloading drivers for your NVIDIA GPU, let’s discuss the automatic alternative. Yes, you can also get the latest NVIDIA GeForce MX150 driver on your PC automatically with minimal effort. And this method is also pretty time-saving. All you need to do is download a competent third-party driver updating and repairing tool like Bit Driver Updater on your system. After that, the program will take care of all the rest steps, such as finding, downloading, and installing apt drivers.

There are a lot more other benefits of using Bit Driver Updater. Below are the prominent ones.

Now, let’s talk about the easy functionality of the software and know ‘how to download, install, update, and repair the NVIDIA GeForce MX150 driver via Bit Driver Updater.’ 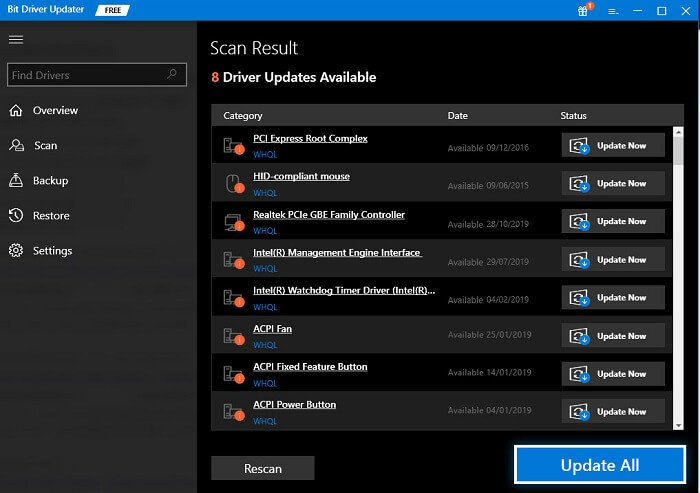 If you want to update all the PC drivers, then select the Update All option. However, before that, you must opt for the Bit Driver Updater pro version.

So, that was all about how to download, install, & update the driver for your NVIDIA GeForce MX150 GPU. We have discussed plenty of ways above. However, to save time and effort, one must pick and use the best one only. And, in our opinion, using Bit Driver Updater is the best way to download, install, and update the NVIDIA GeForce MX150 driver on Windows PC. Let us know what you think by using the comments section below.

If the post was helpful to you, then subscribe and bookmark the Innovana blog to read more such posts.

Keep yourself updated with the latest technology and trends with Innovana Thinklabs Limited.
Aman Apr 28, 2021 0 1.36K